Grassy, wind-swept beaches brushed by the Atlantic’s rolling foam. Secluded Pamlico Sound fishing communities somehow overlooked by time. Hatteras and Ocracoke Islands, treasures of the Atlantic coast, rejuvenate vacationers, carrying them beyond the clutches of their day-to-day humdrum to a place where tranquility has survived the centuries.

A river of sand flowing between the Atlantic Ocean and Pamlico Sound, the historic islands are among America’s most unique vacation destinations. From atop the famous Cape Hatteras and Ocracoke lighthouses, you can witness the stillness of the dawn give way to a bustle of activity. Bicycle tours, making their way through Ocracoke, are glimpsed beneath the canopy of oak and red cedar groves. Kayaks glide across Silver Lake Harbor while crabbers and anglers drop their lines from the pier. As deep-sea fishing boat charters return to port with their morning haul, surfers usher the white-capped tide ashore. A parade of waverunners, windsurfers and kiteboarders take to the wind and waves while the sun climbs the sky.

Steeped in centuries of history, Hatteras and Ocracoke Islands are home to several amazing museums. The Graveyard of the Atlantic and Frisco Native American museums, as well as the Ocracoke Preservation Society Museum, tell the islands’ tale. For a glimpse of life in Hatteras before human history, spend some time strolling the trails at Hammock Hills and the Pea Island National Wildlife Refuge, or shelling and bird watching at the Cape Hatteras National Seashore.

Graveyard of the Atlantic Museum

Forces of nature, commercial salvaging, looting and vandalism have taken their toll. The Graveyard of the Atlantic Museum is dedicated to preserving this vital aspect of our history for present and future generations. 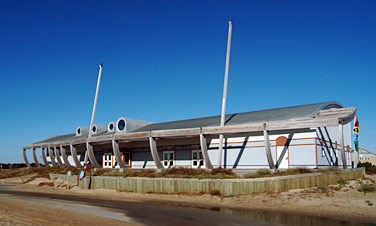 Not every visitor to the Outer Banks has been lured by sun, surf, spectacular beaches and world-class fishing! Some were victims of pirates, wreckers and privateers; others were washed ashore when nor’easters and hurricanes broke their vessels on the shoals. Some came with dreams of conquest; others simply disappeared. For over four hundred years, the waters off the Outer Banks have been among the most dangerous in the world. Over the centuries, so many ships and lives have been lost along these shores, the waters all along the Outer Banks are known as the “Graveyard of the Atlantic.”

Aside from the majestic lighthouses, little remains of this turbulent past. Forces of nature, commercial salvaging, looting and vandalism have taken their toll. The Graveyard of the Atlantic Museum is dedicated to preserving this vital aspect of our history for both present and future generations.

Adjacent to the Hatteras-Ocracoke Ferry Landing at 59200 Museum Drive in historic Hatteras Village, the 19,000-sq.ft. museum incorporates large wooden beams and graceful curved lines reminiscent of the 17th-, 18th-, 19th- and 20th-century ships that rest off the banks. Built to withstand catastrophic weather, the museum proved its mettle during Hurricane Isabel. The museum houses engaging, interactive displays in three gallery zones. “Exploration, Transportation and Commerce” chronicles the early explorations of our coast, attempts at colonization, the development of the Labrador and Gulf Stream shipping lanes, the role of the lighthouse and lifesaving services, and mysteries such as the ghost ship Carroll A. Deering. “Piracy and Warfare” surveys the pirates who camped on our shores and roved our seas, plundering ships of every nationality. Tales of Civil War blockade-runners, the loss of Forts Hatteras and Clark, and the historic sinking of the USS Monitor are recounted.

The results of the devastating, unrestricted submarine warfare during World Wars I and II are also chronicled. “Shipwrecks” showcases the most recent technologies and procedures used in retrieval.

For hours of operation, please call 252-986-2995 or visit www.graveyardoftheatlantic.com

Theories abound about the origin of the wild ponies that have roamed the salt marshes for 200 years. Today, the National Park Service manages the herd that lives in a penned area here. Ponies can be viewed from a wooden platform overlooking the fenced pasture. No fee.

The National Park Service has been caring for the native ponies on Ocracoke Island since the early 1960s. It is commonly believed that the ponies arrived on the island in the 16th century from shipwrecks or were left by ships needing to lighten their load for passage through the shoaling inlets. The Ocracoke ponies, also known as Banker ponies, share a genetic link to “Old Spanish” horse genetics and are similar to the pony herds found on the Currituck Outer Banks and Shackleford Banks. Their unique characteristics include having one fewer lumbar vertebrae, one fewer rib, greater bone density, wide foreheads and strong, short necks. 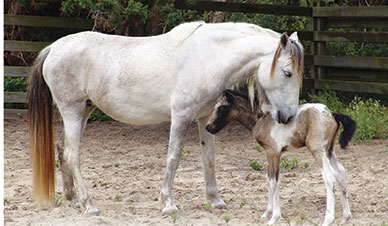 There were once as many as 300 ponies roaming freely on the island. In the late 1950s Captain Marvin Howard, an Ocracoke native, formed the only mounted Boy Scout troop in the United States. Each Boy Scout was responsible for capturing, taming and caring for his own pony. The troop marched in parades and conducted their scouting activities all on the backs of their trusted ponies. Several members of the mounted scouts remain as residents on Ocracoke today. In the 1970s and 1980s park service law enforcement rangers used the ponies in mounted patrols. Cape Hatteras National Seashore is the only park service unit to have utilized native ponies as service animals.

An area of approximately 180 acres was enclosed in 1959 to protect the island from overgrazing and to safeguard the ponies from traffic on NC Hwy 12. Today the Ocracoke herd consists of 17 ponies. The ponies can be seen every day from two viewing platforms at the pony pens located seven miles north of Ocracoke village. The park service is thankful to have dedicated volunteers, many of whom have several years of service, to help with the daily feeding and care of the ponies.

If you’re interested in helping to support the Ocracoke pony herd, you can adopt a pony in person at the NPS Ocracoke Visitor Center located in the village of Ocracoke. Adoption forms can also be found at the Ocracoke pony pens and online at www.nps.gov/caha/supportyourpark/adoptapony.htm. Donations are used exclusively to help defray the costs of veterinary care, feed and hay, and the repair of the pony pasture and facilities. Donors receive an 8″x10″ photo and certificate of adoption with the pony’s name, age, and description in a presentation folder. A $25 donation is requested per pony ($27 if you request shipping of the certificate). Adoption forms can be mailed to: Attn: Adopt A Pony, National Park Service, Ocracoke Ranger Station, PO Box 340, Ocracoke, NC 27960.

Across the Ocracoke Inlet from Ocracoke Island lies the ghost town of Portsmouth Village. The remaining structures there tell a story of a port town, fishing village, historic buildings, and the people that used to live there. 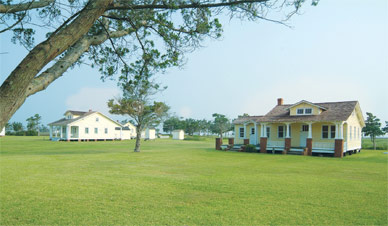 In 1753, the North Carolina Assembly established Portsmouth and it quickly became the largest settlement on the Outer Banks. The Ocracoke Inlet was one of the only major trading routes and Portsmouth and Ocracoke were both active port towns.

Portsmouth thrived and by 1860 had nearly 700 permanent residents, 117 of whom were slaves. It served as a “lightering” village for ships passing through the inlet. With the inlet so shallow in some places, many larger ships could not pass through. Portsmouth villagers, with the help of slave labor, would transfer cargo to flatboats and then reload the boats on the other side. The village was a place of storage and shipping facilities for this method. This industry helped Portsmouth prosper until the Civil War when many of the islanders left. With the inlet that formed on the Hatteras side in 1846 and the shipping industry halted, Portsmouth’s fate was destined to diminish.

In 1894, a U.S. Lifesaving Service was established and lasted 43 years, employing local men and keeping life in the little village. When it was decommissioned in 1937, the population began to further dwindle.

In the early 1900s, Portsmouth was home to about 100 people. The island men worked for the Coast Guard or fished the local waters. Residents lived a simple life and were always prepared. The weather was always a threat that loomed in the distance whether it be hurricanes, nor’easters, flooding, or high winds. Residents waited for the mail boat each day for news, mail-order items, and their mail.

Ocracoke began to thrive as a vacation spot in the 1950s. Portsmouth had no electricity, no paved roads, no ferry service, no telephones, and no steady ties to the outside world. The last two residents of Portsmouth left their home behind in 1971.

In 1975, Portsmouth was incorporated into Cape Lookout National Seashore in an effort to preserve the village and keep the spirits alive. About 20 structures are still standing and are registered with the National Register of Historic Places. The Cape Lookout National Seashore leases several buildings to individuals for a couple of thousand dollars a year and the promise that they will maintain and improve the buildings.

Friends of Portsmouth Island was formed in 1989 and consists of about 300 members. The group has a homecoming on Portsmouth in April of even years and has ongoing projects to improve and preserve what is left, collect artifacts, and promote knowledge of the island.

Today, Portsmouth Island gets several hundred visitors a month in the summer season. There is a visitor center on the island with solar toilets. If you visit, it is suggested to bring your own water, food, adequate clothing, insect repellent, and sunscreen. The village is accessible by private boat if you can navigate the shallow waters, or by a charter service from Ocracoke. The Methodist Church, the old general store with post office, and the Life-Saving Station are open to the public. Camping is not allowed in the historic district. Pets are allowed on a six-foot leash. Step back in time and visit Portsmouth Village. 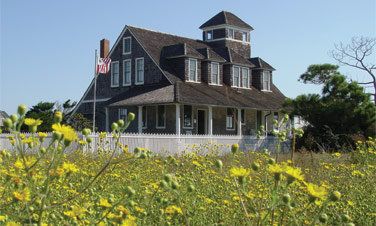 Chicamacomico was the first to be completed and manned. The Life-Saving Service was responsible for rendering aid to those in peril from the sea and in 1915 evolved into the U.S. Coast Guard. The site includes the 1874 station, the 1892 cookhouse, the 1911 station with its separate cookhouse, the boathouse, the stable, and the tractor shed. A recent addition is the 1907 Midgett home, now open to the public. This is considered to be the most complete remaining site of a U.S. Life-Saving Station in the country. Numerous displays and artifacts of the Life-Saving Service and the Coast Guard abound.

Staff and docents are available to tell the history of the station and the rescues that are a part of it. The most famous was the 1918 rescue of 42 of the 51 men aboard the British tanker Mirlo, saved from a fire which resulted from an attack by a German U-boat during WWI. Surfboat No. 1046, used in that rescue, as well as many other artifacts, are on-site.

The 7-acre, 8-building complex is owned and operated by the Chicamacomico Historical Association, a nonprofit organization. The site and museum shop are open Monday through Friday from 10am-5pm, mid-April to November. The site is listed on the National Historic Register. It is also part of the Historic Albemarle Tour and one of the official 30 sites on the Outer Banks Scenic Byway. Brochures are available on-site, listing other historic tour destinations, as well as a Passport Stamp for your traveling passport adventures.

Shopping and dining in Hatteras and Ocracoke are no less unique than the islands themselves. Take a break from an afternoon of swimsuit shopping to indulge in a rich cappuccino. Fill your bike basket with a picnic lunch for an afternoon of kite flying with the kids. Attend a wine and cheese tasting event after touring the eclectic art galleries. Whether you’re in the mood for local flavor or cosmopolitan cuisine, the islands’ many restaurants cater to every taste. Local artisans, renowned for their craftsmanship, invite you to explore their collections of locally handmade works and unique imports.

With so many ways to eat, shop and spend the day on Hatteras and Ocracoke Islands, explore

Dolphins in the Outer Banks