Dolphins in the Outer Banks

With glassy fins and graceful arches, they break the ocean’s surface, skin glistening, their sleek bodies gliding through the surf with ease. They are regular visitors to the Outer Banks when the days are long and the water warm. They’ve been known to jump and frolic and feed within sight of the shore, and their presence can easily draw a crowd.

Dolphins can be found all along the Outer Banks coast and in the sounds that separate the islands from the mainland. Researchers estimate that 500 dolphins migrate to the Outer Banks to give birth during the warmer months (May through September). There is also a small year-round resident population of dolphins here. When autumn arrives, many of the dolphins migrate southward.

They are bottlenose dolphins, and their friendly nature conjures up comparisons to Flipper and marine park shows, but these are not domesticated mammals. They are wild and free – creatures of the sea. A glimpse into their untamed environment provides a glimpse into ocean life that never ceases to delight.

Perhaps that’s why dolphin-watching excursions are so popular in this area. These guided boat trips give patrons the opportunity to observe bottlenose dolphins in their natural habitat. Of course, they can be spotted from the beach as well, but there is something to be said for being up close and personal with these beloved creatures. Thrilling, spiritual and spectacular are just a few of the adjectives frequently used to describe such encounters! But just what is it about this particular mammal that elicits such interest? 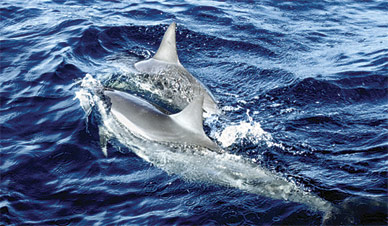 For starters, dolphins rank among the most intelligent of marine mammals, and bottlenose dolphins like the ones on North Carolina’s coast are some of the most researched. Bottlenose dolphins can be recognized by their long, blunt snouts and sickle-shaped dorsal fins. Containing no bones, the dorsal or back fin keeps the dolphin moving in a straight line. Their long, narrow, torpedo shape makes them ideally suited for life in the water. A dolphin propels itself with powerful up and down strokes of its tail reaching speeds of up to 35 miles per hour. The flippers help the dolphin steer and have bones that look similar to the bones in a human hand. Dolphins have excellent eyesight both above and below water, and even though their ears are barely visible, they have good hearing. Bottlenose dolphins are found in both the Atlantic and Pacific oceans. They typically weigh 440-600 pounds, live an average of 20 years and reach an average length of 10 feet. As marine mammals, they require a tremendous amount of food in order to maintain their body temperature and metabolism. It is estimated that an adult dolphin eats close to 40 pounds of a variety of fish each day.

Being very social animals, they travel in family groups of 2-6 called pods, and visit among other groups in the community. Bonds between dolphins can last for years. Like other dolphin species the bottlenose are well-known for their playful, carefree character. Many would consider them friendly, seeming to enjoy human interaction, but they can also be aggressive and territorial. With 18 to 26 pairs of sharp, conical teeth on either side of their jaws, it’s a good idea to respect their space. When using personal watercraft, it is unlawful to steer into a pod of dolphins. Keep a respectful distance so as not to disturb them.

Where do Dolphins Live in the Outer Banks?

It is estimated that more than 500 dolphins call the Outer Banks home during the summer months. The summer dolphins arrive in early- to mid-May to give birth to their young. They remain throughout the summer and then migrate south for the winter. But for some dolphins, the Outer Banks is also a winter home. It was discovered that some of our summer dolphins, along with some bottlenose dolphins who summer north of here, spend their winter between Cape Hatteras and Cape Lookout.

You can even identify individual dolphins, if you look really hard. Each fin is uniquely shaped with distinctive scars and markings, allowing scientists to distinguish individuals.

The Outer Banks is an ideal place to take a dolphin boat trip to learn even more about these miraculous creatures. These excursions will get you close enough to safely connect with these incredible animals and to experience them in the wild, in a world where humans are visitors and the bottlenose dolphin is happily at home.

Other Activities in the Outer Banks

The Outer Banks are a chain of barrier islands that run in parallel to North Carolina’s northeast coast. These barrier islands, which are detached from the mainland by a series of large shallow sounds, are an area of natural beauty with long rugged beaches.

You can take a ferry from Hatteras to Ocracoke Island. Ocracoke Island can only be reached by plane or boat. The 40-minute ferry ride is scenic and allows you to explore the 14-mile-long island where Blackbeard the Pirate once resided. Children will have a great time!

How to Visit Charleston, South Carolina