Book & Activity: How Do Dinosaurs Eat Their Food? (Printable)

I don’t know about you, but I just have lost all motivation this week.  Maybe it’s the holiday weekend that just passed, throwing everything off schedule. Maybe it’s the dreary weather that we’ve been dealing with since, I don’t know, April?  Or maybe it’s because I’m jacked up on fertility meds and have no energy or patience anymore.

Whatever the reason, I’m having trouble getting these posts out to you.  For that, I’m sorry.  It also doesn’t help that my son has had no interest in doing any activities with me lately.  He just wants to play outside. Can’t blame him for that.  So, this week’s activity will be lacking in pics, but I’m making up for that with a fun printable!

How do Dinosaurs Eat Their Food Book

This week’s book is How Do Dinosaurs Eat Their Food? by Jane Tolen and Mark Teague.  Are you familiar with this series? It tries to teach kids through dinosaurs.  Very well-behaved dinosaurs, actually. 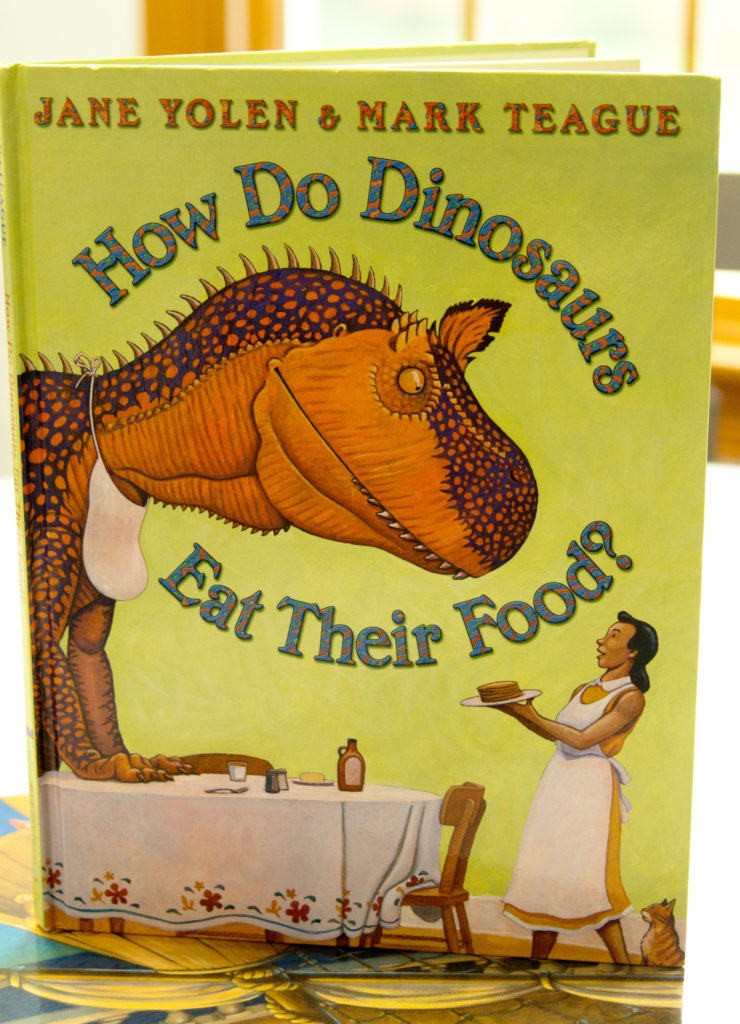 The story is asking children how do they think dinosaurs eat their food.  It then takes us through pictures of dinosaurs doing very rude (and funny) things with their dinners.  But, we are told, that’s not true.  Dinosaurs have impeccable manners.  They try all that’s on their plate and never make rude noises or whine.

I don’t know about you, but I have a very picky toddler on my hands.  I like books that encourage kids to use manners and try new things. The book hasn’t really helped him be less picky, yet.  But, it does a nice job of reminding him of how he should behave at the table. I like to break it out every few months just as a refresher.

Definitely, if you haven’t already, check it out.  Also, try some of the other books in the series.  They all have great lessons on manners and behavior without being too preachy.

How do Dinosaurs Eat Their Food Activities

As I mentioned above, my son is very picky.  It’s not so much that he doesn’t like food, he just is too stubborn to try anything that looks different.  He actually has a pretty sophisticated palette, if we can just get the food into his mouth.

A few months ago, I signed us up for a fun snack box subscription from Universal Yums. Every month, they send snack foods from a different country.  Included with the food, was a scorecard.  Each member of the family would rate how much they liked each food.  Either with a smiley face, a meh face, or a frowny face.

He loved it!  He tried everything in the box! And he liked most of it!  Even stuff that my husband and I weren’t keen on, he loved.  There were things he wasn’t a fan of, but he had fun tasting everything.  The snack box became a way for us to bribe him into finishing his dinner.  So, that was a win, too.  But, the thing he liked the most was filling in that scorecard.

So, a few weeks ago, when my son was going through a particularly picky phase (how’s that for alliteration!),  I came up with a brilliant idea.  Why not make up a scorecard for dinner, just like the one in the snack box?

So, I gave it a try.  We ordered a bunch of different things from our local Chinese Restaurant.  I made up a simple grid chart with our names on top and the dishes on the side.

When the food came, we sat down and I put a little of everything on his plate.  I made sure I got his favorite (dumplings) and made sure nothing I ordered was too scary and all of it was sort of familiar (just like the exotic snacks we tried).

It worked!  He tried everything on his plate!  And, he had so much fun doing it.  I’ve been meaning to try it again but forgot to save the chart that first night.  (Yeah, dumb move on my part!)  Since I had to make up a new chart, I decided to make it a little nicer and share it with all of you, too.

The top is blank so you can fill out your names.  The sides are labeled 1-6 to correspond with whatever food is served.  As a group/family, everyone tries each item at the same time.  Give your kid a marker or crayon and let them be the official scorekeeper.  If you expect resistance, have a treat as a reward for the “winner” (which is everyone who tries at least one bite of everything). 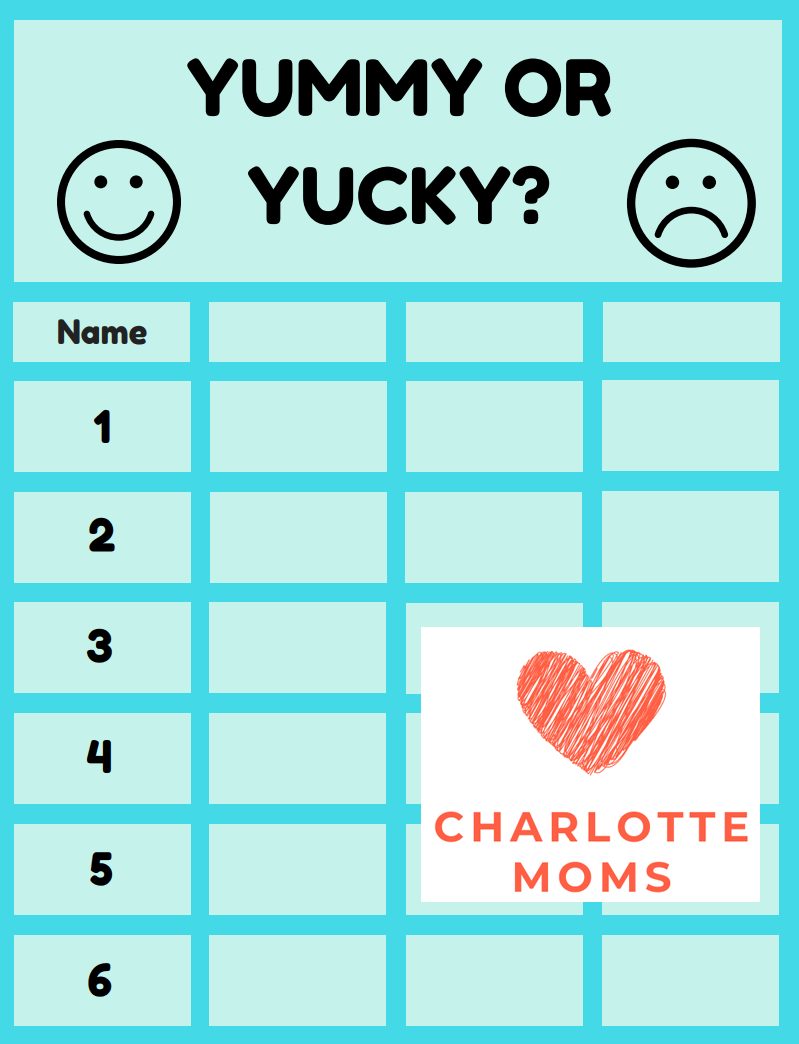 10 Amazing Ways to Relax for a Busy Mom